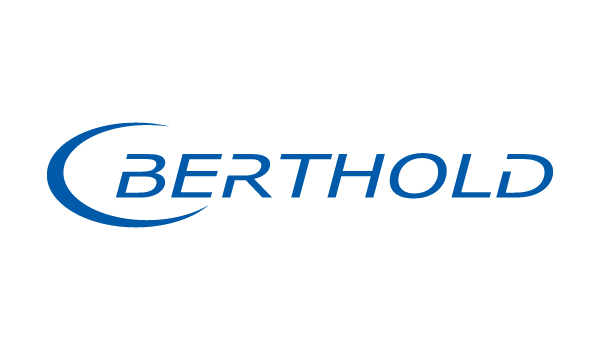 Our comprehensive line of reliable Microplate Readers deliver the versatility, sensitivity, precision, dynamic range and throughput you need to solve your complex analytical challenges. Every lab is unique. That's why you deserve a Microplate Reader that fits your needs. Maybe your research requires maximum application flexibility, or high throughput. Perhaps you are looking for simplicity, delivering reliable results. Whatever you need, there is a Berthold Technologies Microplate Reader to fit your research needs. 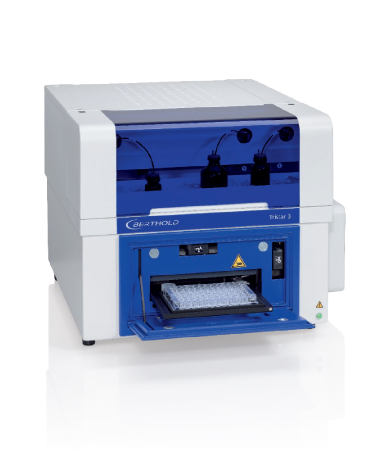 Simplicity and sensitivity for all levels of experience 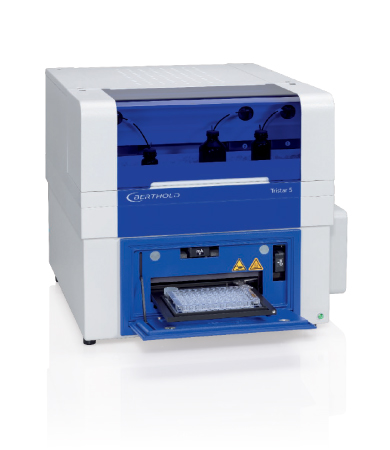 Flexibility and sensitivity whenever you need it 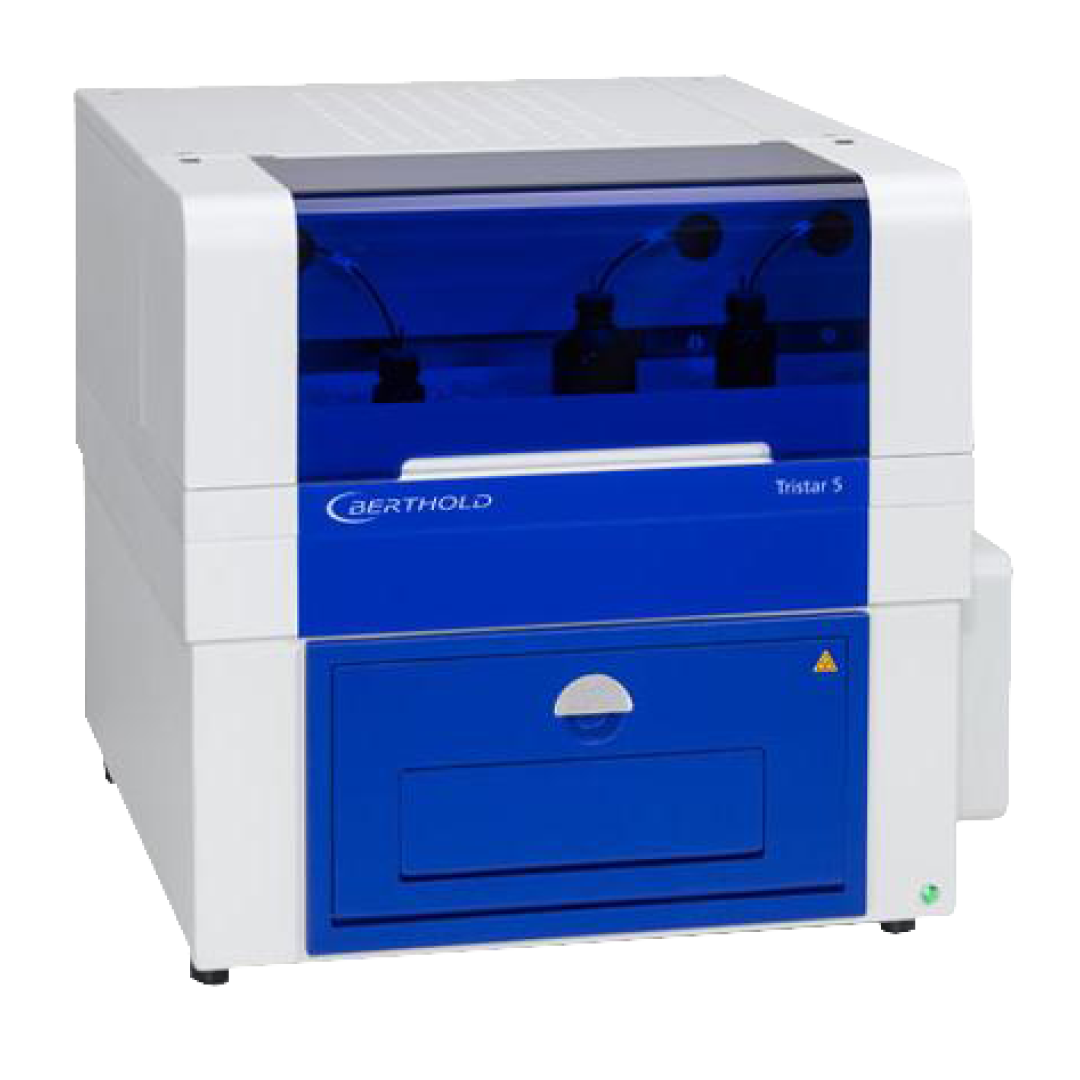 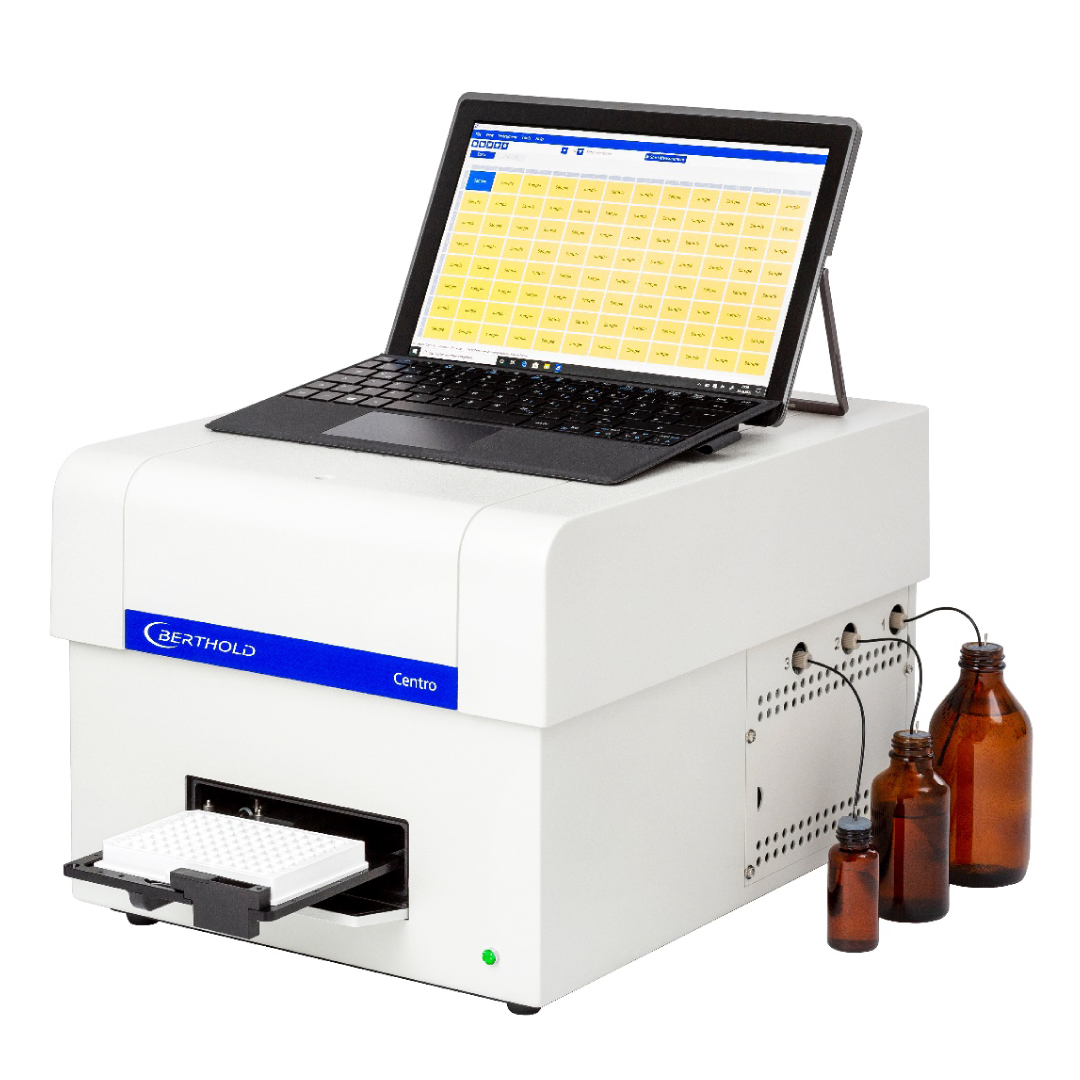 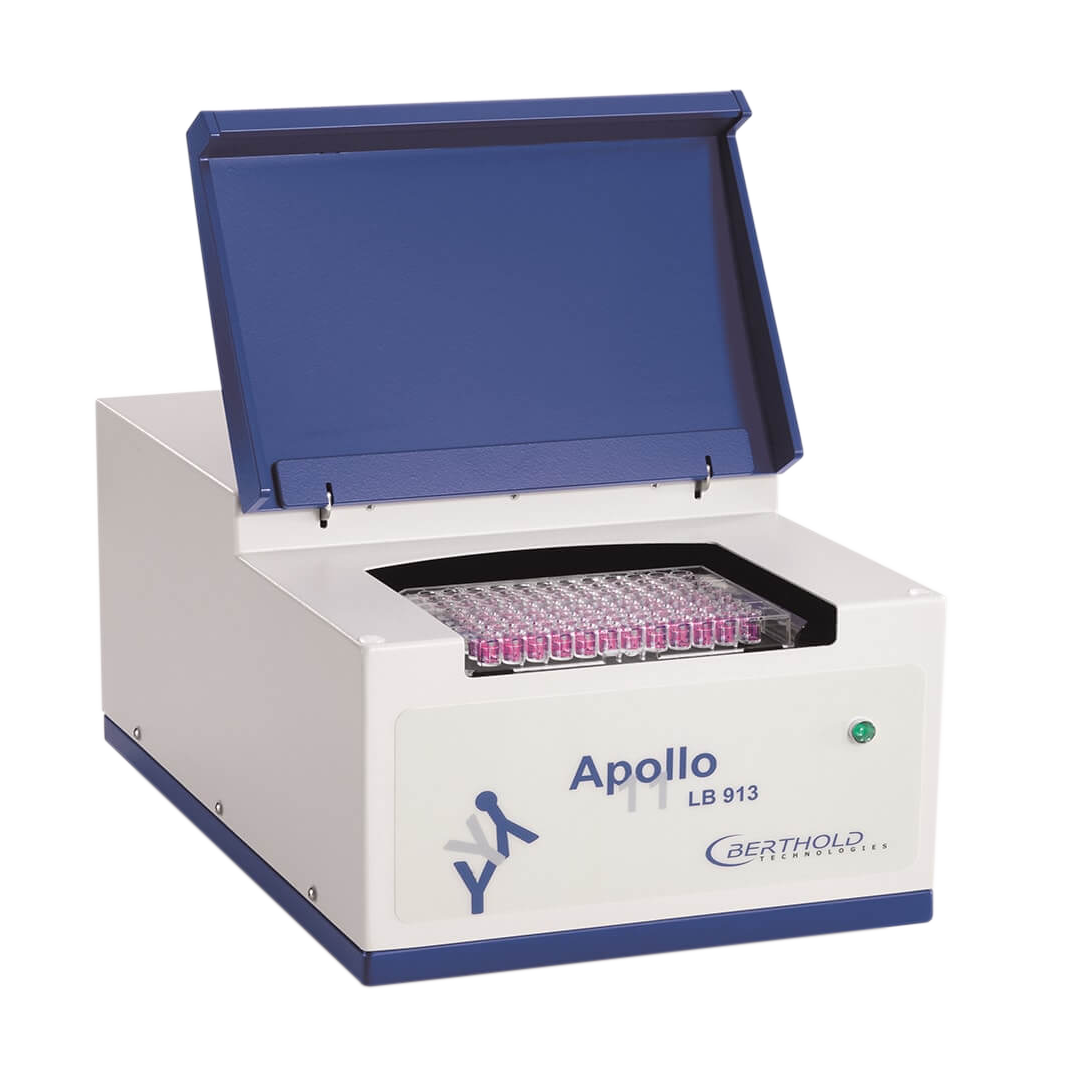 There are many different types of microplate readers available and it can be sometimes difficult to pick the reader that best suits your needs. The basic considerations will be discussed below. 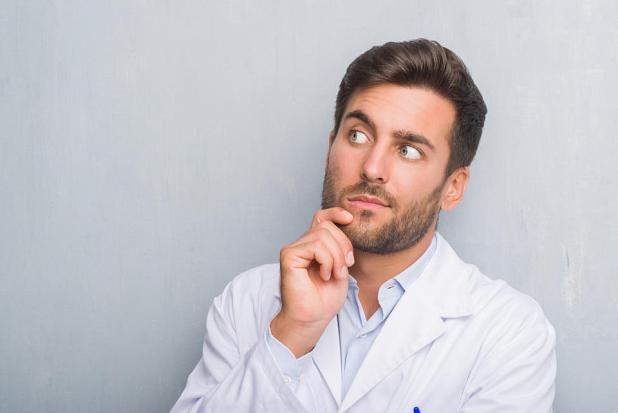 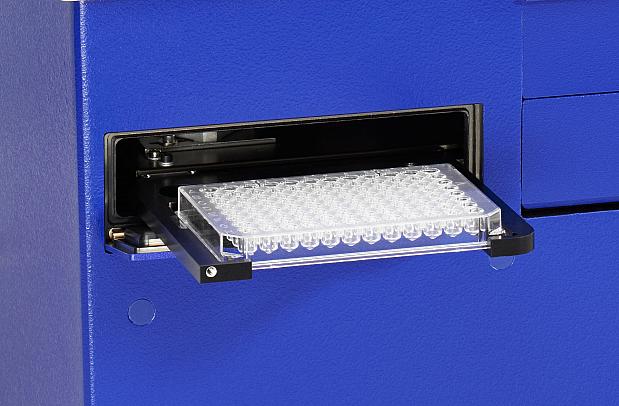 A microplate reader (also called sometimes microtiter plate reader) is a high-sensitivity instrument designed to analyze samples contained in microplate wells. Microplate formats can vary from 6-1536 wells, providing the ability to read many samples in a short time. The measurement can be performed using a variety of detection technologies: the most common detection modes used in plate readers are absorbance, luminescence and fluorescence. Microplates have become indispensable in modern laboratories and save labor, time and costs.

There are several ways to classify microplate readers, but in the event of choosing or purchasing one, there are two important classifications: by detection technologies and by wavelength selection mechanism.

Multimode microplate readers are able to use more than one detection technology. They are more complex than dedicated microplate readers, and some design compromises have to be made to accommodate all detection modes in a single instrument, but they offer great flexibility and, especially in advanced instruments with dedicated optical paths for each detection mode, such as the Mithras² LB 943 Multimode Microplate Reader have excellent performance in most applications.

For more information about the available detection technologies, see below.

Another important characteristic when choosing a microplate reader is the system used to select the wavelength, as it has a major impact on many applications. The main options are filters, monochromator, and no wavelength selection.

Affordable microplate readers use normally filters to select the desired wavelength for any given detection method. Being the affordable option does not mean it is the worst one: filters have a very high transmittance and this brings a higher sensitivity in many applications. In addition, wavelength switching is very fast, a desirable feature in ratiometric assays. The main disadvantage is that you need a different filter for each wavelenght needed, and that reduces flexibility and makes it impossible to perform a wavelength scan.

On the other hand, monochromators provide total flexibility, not only in wavelength selection, but also in bandwidth selection. But, as mentioned, sensitivity in most applications is worse than when using filters.

Some microplate readers from Berthold Technologies offer you the best of both worlds: both the Tristar² S LB 942 and the Mithras² LB 943 can be configured with both filters and monochromators, so you can select the best option for your application.

Luminometers usually lack filters or any other way of wavelength selection: light of all wavelengths can potentially reach the photomultiplier. This provides the best sensitivity, but is a limitation for BRET, as this application requires to selectively measure light emitted by the donor and by the acceptor.

Both filter- and monochromator-based microplate readers are available. Find out more about the detection modes below:

UV/VIS Absorbance or Optical Density is used in countless classical colorimetric methods, ELISA, nucleic acid and protein quantification, and many others. The basic principle of absorbance measurements is described by Lambert-Beer's law.

BRET(Bioluminescence Resonance Energy Transfer) is based on the fact that the energy derived from a luciferase reaction can be used to excite a fluorescent protein if the latter is in close proximity to the luciferase enzyme, and is thus, an excellent tool to monitor macromolecular interactions. As many dedicated luminometers lack filters, multimode microplate readers are usually the instrument of choice for BRET measurements.

FRET (Fluorescence Resonance Energy Transfer) is a dual dye fluorescence detection assay. It requires a donor and an acceptor dye being in close proximity (10-100 Å). As a result of excitation, the donor fluorophore can transfer part of its energy to the acceptor fluorophore, e.g. YFP and starts emitting light without being directly excited. FRET is most frequently used to visualize molecular interactions of proteins and nucleic acids.

AlphaScreen® relies on hydrogel coated donor and acceptor beads providing functional groups for conjugation to biomolecules. When excited with a laser at 680 nm the donor bead produces singlet oxygen which transfers energy to the donor resulting in light emission between 520 and 620 nm. The amount of light produced is directly proportional to the amount of bound donor-acceptor beads. AlphaScreen® is a versatile method used to evaluate interactions between a binder (or a collection of binders) and a target (or a collection of targets). Only microplate readers equipped with a laser are suitable for AlphaScreen® measurements.

Time-Resolved Fluorescence (TRF) implies the use of fluorophores with a distinctive fluorescence lifetime to avoid the interference caused by molecules with a very different fluorescence lifetime or other factors (most importantly, excitation light). It uses long emission fluorophores (lanthanides) such as Europium or Terbium. TRF is used to elucidate molecular interactions, inter- or intramolecular distances, changes in the microenvironment, resolution of molecular mixtures, and more. A flash lamp or laser are the light sources of choice in any microplate reader to be used for Time-Resolved fluorescence measurements.

TR-FRET (Time-resolved fluorescence energy transfer) is a variant of FRET using long emission fluorophores (lanthanides) as donors. TR-FRET represents a powerful tool for drug discovery researchers. The resulting assay provide an increase in flexibility, reliability and sensitivity in addition to higher throughput and fewer false positive/false negative results. TR-FRET can be applied to detect the association of two molecules, for example to analyze receptor-ligand or protein-protein interactions.

There's lots of Microplate Readers on the market, find out how Berthold's will work for your applications 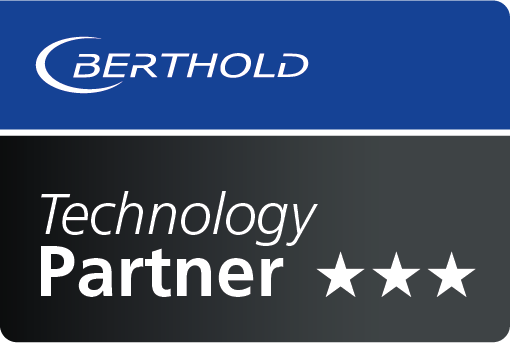 Scienze is proud to be an official technology partner with Berthold Technologies GmbH & Co. KG. 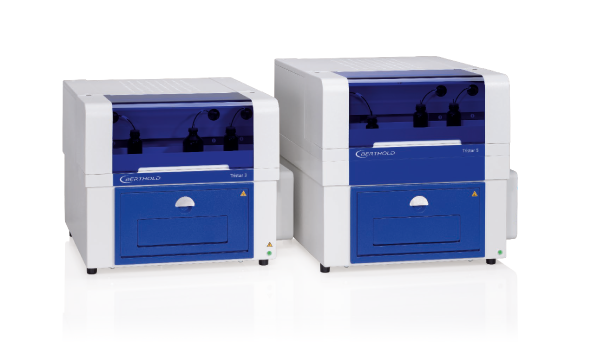 Thanks for your message! We’ll be in touch soon.

A to Z Product Listing

A to Z Product Listing